The Hawaiian Homestead of Keaukaha is Born

In 1924, Keaukaha became the third Hawaiian homestead to be established. 52 Hawaiians received land parcels within Keaukaha.  A few months later in 1925, 89 more applicants received confirmation to move to Keaukaha. By the year 1926, over 40 homes were built within the community.  The demographics of this community consisted of Hawaiians who were from all over the Hawaiian Islands.

As lessees built their homes and established a new Hawaiian community, skeptics were quickly provided negative criticism about the HHCA.  Some believed that the 200,000 acres of land that were set aside as Hawaiian Homelands were unproductive lands that nobody wanted.

A Brief History of Keaukaha: The Land, People, and Community

Verdant home in the hala groves

(There is no value in these rocky lands, cats could not live there, there is no water, plants will not grow, and there is much negativity towards Prince Kuhio’s Bill.) 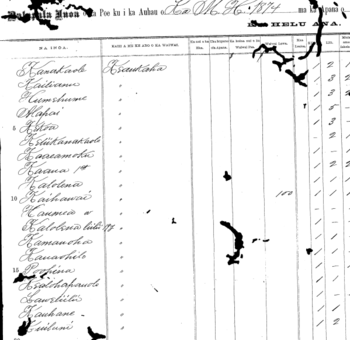 (Nowadays, those lands that were thought of as being a joke to ridicule the Hawaiian people, Hawaiians reside there, and are transforming those harsh pāhoehoe lands…into places where plants grow heartily.  Here are some lessees living happily on these pāhoehoe lands, and these pāhoehoe lands are being regarded as a paradise for these families.)
​- Ka Hoku o Hawaii, March 16, 1926

Despite the criticisms, our kūpuna, with their barehands, cultivated the land and made Keaukaha into the Paradise that we see today.  Here are some quotes from the Hilo-based Hawaiian language newspaper, Ka Hoku o Hawaii that describes their success:

1874 Tax Ledger with the names of Keaukaha Residences. Courtesy of the Hawaiʻi State Archives. To access, click here

The Hawaiian homelands of Keaukaha.

(These two dinner tables were completely filled with a variety of raw fish that were caught in the hukilau style of fishing by the Hawaiian homesteaders and filled their large bodies with numerous different types of fish.)
- Ka Hoku o Hawaii, August 3, 1926